Kimberley Walsh on her body image: I was nicknamed duck-bum! 'I was nicknamed duck-bum!': Kimberley Walsh opens up about her body image issues

She's the curviest member of Girls Aloud, but Kimberley Walsh has always seemed confident with her womanly figure.

In fact, unlike most of her bandmates, the 29-year-old has maintained a manageable weight throughout her career.

She certainly looks comfortable in her own skin, but Kimberley has revealed she struggled to come to terms with her shape while at school.

The singer was even nicknamed 'duck-bum' by her peers.

She told the new issue of Zest: 'When I was at dance classes in Bradford, my teacher would always shout, «Pull in your bum, Kimberley!»

'It’s been sticking out since I was two. I had the biggest bum out of about fifty girls in my class.'

And Kimberley says she has a fellow popstar to thank for helping her realise that her curves are beautiful.

It was when Beyoncé shot to stardom that Kimberley learned how to dress for her shape.

'We were exactly the same age and she looked amazing, so I started to dress like her and suddenly my shape made sense,' Kimberley said.

'I’d think: «Oh, yes. Beyoncé’s wearing a figure-hugging dress and drawing attention to her tiny waist», so I’d buy a new dress and a large belt, go out and pretend to be Beyoncé. She was a great alter ego for me.'

Beyoncé's influence has clearly stuck, as Kimberley usually does a great job of dressing to show off her best assets.

She stole the show at the premiere for her new film Horrid Henry at the end of last month.

The star looked radiant in a bright red dress and lipstick to match, and was joined on the red carpet by fellow bandmates Sarah Harding and Nicola Roberts.

Curvy girls: Kimberley showed off her derriere in a pair of pink colour pop jeans as she arrived back from LA last month

Glam: By 2009 the girls had a much more glamorous look

The film is based on the popular children's books of the same name, in which Kimberley plays Horrid Henry's cousin, Prissy Polly.

She follows in the footsteps of Sarah, who launched into the acting world with a role in the two St. Trinian's films.

Kimberley also spoke out in the interview about about exercising with the rest of the Girls Aloud group. 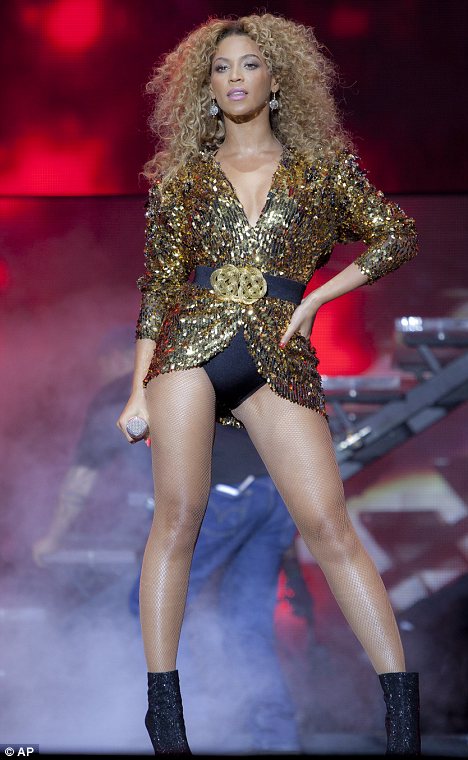 Zest is on sale now

'Some days, we’d all work out together. It was very amusing.

'Nadine can’t run at all. Her legs are so thin, all she does is say: «It hurts to run,''' Kimberley said.

Until Beyoncé came along, Kimberley says she had an unrealistic idea of how her body should look.

‘I grew up thinking Kate Moss was the perfect woman but that was a totally unachievable body shape for me. It was never ever going to happen,' she said.

Now, Kimberley seems to have embraced her body. She has recently landed a role as the ambassador for PUMA TrainLite trainers.

But she maintains that while she has confidence in it, her figure is nothing special.

Show business
Kimberley Walsh
—
33
RSS
Write a comment
No comments yet. Be the first to add a comment!